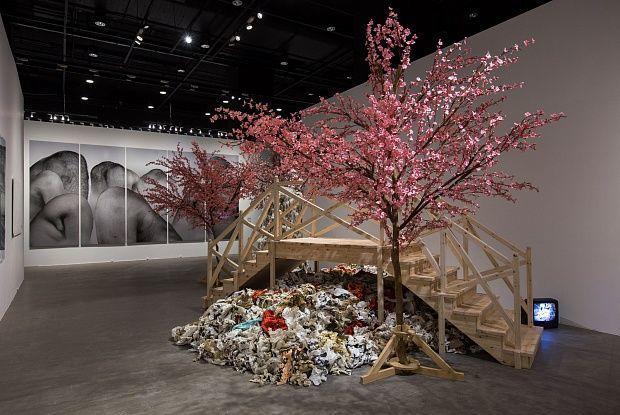 Hong Kong’s culturati were out in full force last night (22 February) for the private view of the exhibition M+ Sigg Collection: Four Decades of Chinese Contemporary Art, which opens to the public today.

The VIP opening ceremony was held at Artistree, an exhibition space in an office tower in the Quarry Bay district. A large contingent flew in from mainland China for the occasion, including artists—among them the abstract painter Ding Yi—collectors such as Qiao Zhibing, and art gallery owners such as Zhang Wei.

Unusually for a Hong Kong show, the event was so packed that important curators and art fair directors had to wait patiently in line at the door to be admitted.

The exhibition consists of around 80 paintings, sculptures, installations and videos by artists from the Chinese mainland assembled by Uli Sigg, a former Swiss ambassador to Beijing and a renowned art collector.

The current exhibition (which runs until 5 April) arranges the works chronologically, tracing the evolution of contemporary art in China from 1974. “The M+ Sigg Collection invites critical reflection on the short history of contemporary art in China and provides lucid insights into Chinese society in a historical period that, in retrospect, will be considered very important,” says Pi Li, M+ senior curator.

The exhibition includes pieces by all the big names in Chinese contemporary art. There are paintings by Liu Xiaodong and Yue Minjun, woodblock prints by Ma Desheng, photographs by Xin Danweng, and an installation of neolithic stone ax heads by Ai Weiwei.

The M+ Sigg Collection is mostly stored in Switzerland awaiting the completion of the M+ building. More than 130,000 visitors saw earlier versions of the exhibition at the Bildmuseet at Umea University, Sweden, in 2014, and at the Whitworth Art Gallery in Manchester, UK, in 2015.

• An accompanying documentary on the Swiss collector The Chinese Lives of Uli Sigg directed by Michael Schindhelm, premiered in Swiss cinemas on 18 February. It will go on show in Hong Kong during the Art Basel fair on 21 March.