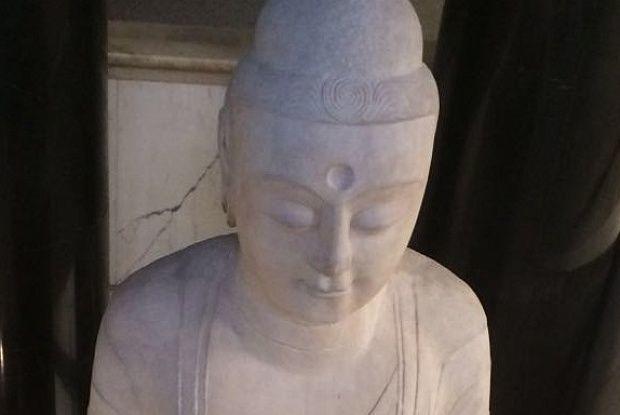 The 1,400-year-old Amitabha Buddha, one of the star pieces of a landmark exhibition of Chinese art held at London’s Royal Academy of Arts in 1935 and a highlight of the British Museum’s collection for nearly eight decades, has undergone its first full conservation treatment in 25 years thanks to funds from Bank of America Merrill Lynch. 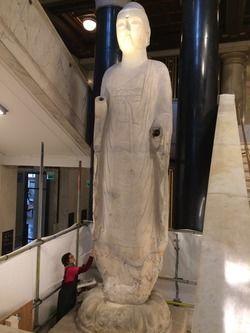 A conservator works on the Buddha Amitābha (Buddha of the Western Paradise) Photo: © The Trustees of the British Museum

The in-situ treatment involved removing a build up of dust from the sixth-century marble statue, which stands an impressive 5.78m tall and has traces of gilding and paint. Conservators used scanning electron microscopy to determine that wood from a jujube tree was used for the dowels that held the Buddha’s now-lost arms and hands. The cleaning also fully revealed an inscription that had been partially masked, which links the colossal statue to the Chongguang Temple in Hebei Province, Northern China, and to 80 members of a Buddhist society known as the Yi-yi.

The Amitabha Buddha or Buddha of the Western Paradise was one of the major works loaned by the Chinese government for the Royal Academy show, which catered to the wave of interest in Chinese art at the time. The Chinese government presented it to the British Museum in 1938. The museum’s Asian keeper, Jane Portal, describes the piece as a “powerful sculpture with a long history in China and a more recent story in the UK”.

The Bank of America Merrill Lynch’s art conservation programme has sponsored more than 80 projects in 28 countries since 2010.