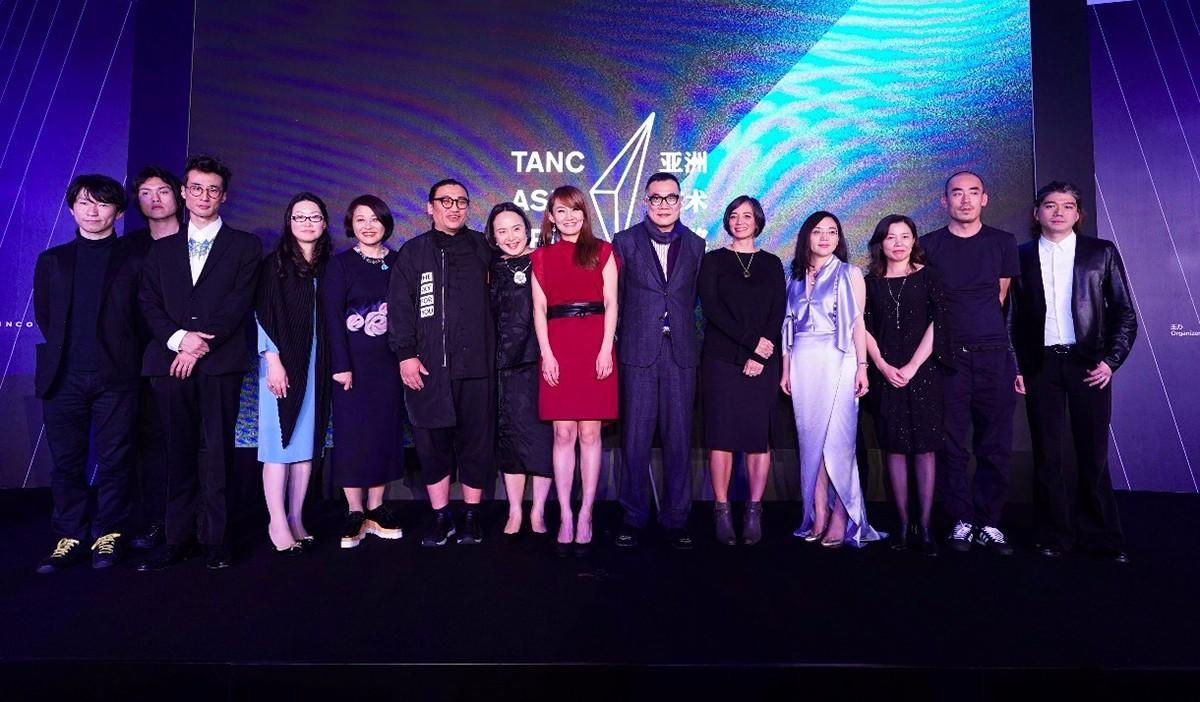 prizewinners, guests, and hosts at the award ceremony

With the exclusive sponsorship from the world-renowned luxury vehicle brand Lincoln, TANC Asia Prize 2015 launched a series of memorable events on 22nd of November at the Shanghai 21st Century Minsheng Art Museum. Entering the second year of the TANC Asia Prize, the prize decided to focus on the Power of Innovation in consideration of the emerging dynamics of art work, exhibitions and projects in the Asia, to discuss the interaction among art, new media technology and social innovation, and the common subjects in a wider context through this platform. TANC Asia Prize of 2015 held a series of conferences, exhibitions and an award ceremony and invited a number of practitioners from various fields to engage communication with innovative ideas. As Cao Dan, executive publisher at The Art Newspaper China, commented in the interview with The Art Newspaper, ‘we wish to establish an award with significant insight and foresight. This award has inherited the DNA from The Art Newspaper and has played a key role in participating in and encouraging communication, especially in the standing of Modern Art of Asia between the east and the west, the old and the new’.

10am on Nov 22nd – Events started with the Power of Innovation TANC Art Forum. 10 speakers, ranging from artists, museum directors, curators, architects, film directors to photography art collectors attended the forum with their diverse experience across various fields. Their excellent presentations emphasized the definition of the theme, Innovation.

The first three speakers were a member of the Japanese new media artist group teamLab, Kudo Takashi, curator Li Zhenhua who has extensive experience with digital media and art communication and Zhang Ding, a curator as well as an artist who has just held his solo exhibition in the Institute of Contemporary Arts, ICA. They shared their own exhibitions and projects respectively, exploring their own questions of self-identification and stereotypes, also demonstrating the importance of challenging their own comfort zone in contemporary art practices.

As a crucial section of the artistic environment, the function and definition of museums in the digital era has changed significantly over time. The last five speakers of the event were the curator of visual art at the M+ museum Pauline Yao, architect Ma Yansong who has completed a variety of museum projects, curator Davide Quadrio, famous photography art collector Artur Walther running his own exhibition space and the director of the Beijing Fine Art Academy Wu Hongliang. Their presentations and talks demonstrate that museums no longer exist as organizations just for collecting art, presenting art and education of the public any more, but act as leaders for shaping the value of art in society. What’s more, the publicity of museum spaces increasingly plays a vital role in large, urban cities, and tends to be profoundly involved in urban life even beyond its subjective existence.

The highlight of the day was the award ceremony which officially begun from 8pm in the evening, with nine prizes covering five different categories. It is noteworthy that the “Lincoln Curator Prize of the Year” is a high-quality and professional award first introduced in this year, exclusively sponsored by Lincoln. It is an recognization of the significance of curators in art creation and communication. Corresponding to the brand’s persistent support for art and art curators, the prizewinner will be awarded a hundred thousand RMB. This award finally went to Li Zhenhua, the pioneering artist and curator of digital art and exhibitions in China. In 2015 he participated in and curated a series of digital art exhibitions and projects: the film sector of Art Basel HK, the 3rd Ural Industrial Biennial of Contemporary Art, Jimei X Arles: East West Encounters International Photo Festival, to name but a few. Li Zhenhua expressed in the morning session of the international forum that ‘a curator would need some courage to Walk Out of the Exhibition Room’. Art as a prospective industry can only keep its steady dynamic through frequent destruction and reconstruction. Just as TANC’s chief editor Ye Ying mentioned, ‘this is not just a prize but presented the innovative energy flow of art.’

“Exhibition of the Year” the sector sector of Traditional Chinese Art went to the “Four Masters from the Wu School” Exhibition Series by the Suzhou Museum. This project lasted from 2012 to 2015 covering four distinctive Masters of Wu School, Shen Zhou, Wen Zhengming, Tang Yin and Qiu Ying, who have been influential in Chinese art history. It presented the profile of four masters of Wu School as well as their respective achievements, and described the special characteristics of Suzhou culture along with other permanent exhibitions in this museum.

“Exhibition of the Year” , the sector of Contemporary Chinese Art was the Mobile M+: Moving Photography. Regardless of the physical limitations of museum space, this exhibition led photography into community spaces, discussing the phenomenon of immigration in the current world changes from globalization.

“Exhibition of the Year” , the sector of International Art Exhibition in China was a three years project, William Kentridge: Note towards a Model Opera by UCCA Beijing. As a South African artist influential in the Chinese contemporary art world, William Kentridge’s relationship with the Chinese art circle was re-presented in this exhibition, developed from difficulties to mutual understanding. In addition, this exhibition also explored the complicated relationship between China and South Africa as well as its historical background.

“The Art Programme of the Year” went to the K11 Art Foundation, which generated a number of international cooperative projects. The K11 Art Foundation was founded by the Hong kongese collector Adrian Cheng. Aimed at promoting Chinese contemporary art in the world, it started a series of interactions with overseas organizations such as Palais de Tokyo, Centre Pompidou and The Institute of Contemporary Art in London.

After fierce competition Zhang Ding won the Artist of the Year. His intricate theatrical multi-media installation was composed of a group of fantastic but confrontational scenarios. In the ceremony he played the video of his first project, Enter the Dragon in the Institute of Contemporary Art London. In this video he includes the live performances of twenty six bands, and he physically applies a number of reflective surfaces to turn the ICA into a Mutating Sound Sculpture. The combination of the live performance from the band and the visual impact from the reflective surfaces enhanced ideas of sensory perception and emotion, constructing surreal scenes full of contrast, often creating metaphors layered with societal references.

The award ceremony’s most exciting part was when the special TANC Asia Prize 2015 was awarded to three separate institutes. It demonstrated the host’s influence on regional development, the culture sphere and emphasized museums’ institutional impact and creativity and the innovation of individual artists.

The award conference ended with teamLab’s art work, What a loving and beautiful world, which impressed all guests with its creativity and innovation from technology. 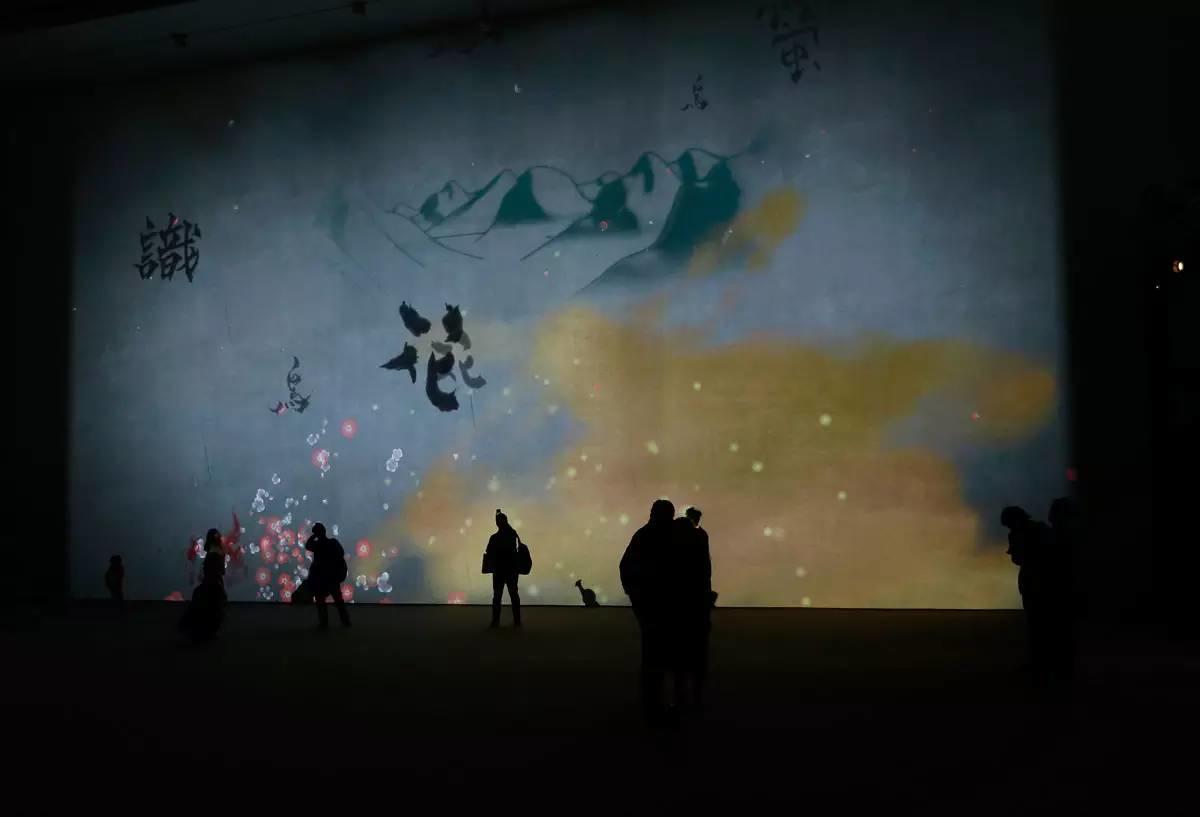 installation view of What a loving and beautiful world by teamLab

What a loving and beautiful world

As a highlight of this award conference, interactive multi-media installation What a loving and beautiful world was created by the Japan-based new media artist group teamLab. It is also the first exhibition of this art work in China. In the completely darkened space, a great of number of elements from wildlife will be displayed on the screen once people touch an area of the screen with Chinese characters representing Forest, Butterfly and Moon. And the reaction of different elements will interact with each other so that a series of scenarios will unfold, such as a forest gently swaying in the wind, butterflies gliding towards a flower and full moon tuning into a crescent. Every character will display a related scene, and will continue generating a new world on screen. In teamLab’s art work, the participation of technology softens the content and strengthens the presentation and interaction, in order to decrease the distance between the art work and audience and to express the concept vividly and more emotively. With this experience, children can easily play with the images and the characters on the screen, and adults can also freely indulge in the artistic environment and interesting animations.

Senior arts appointments nothing short of a French farce